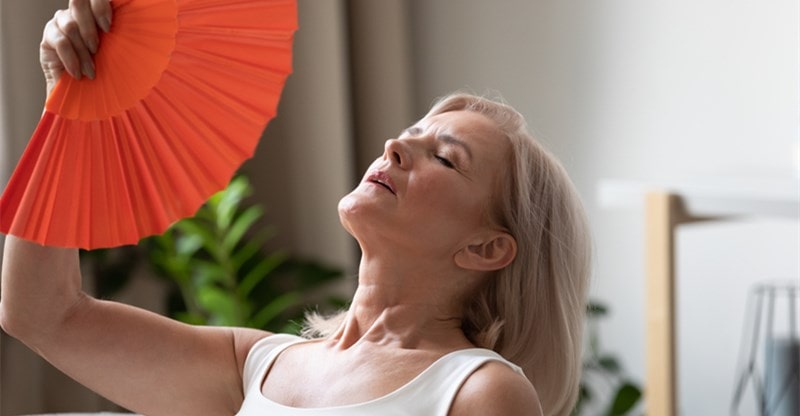 When a woman reaches their 40s, among one of their many concerns is menopause. It is one inescapable and natural event that every woman lives through. However, for some women, this event brings about distress and anxiety because of the accompanying symptoms of this process.

Menopause is the moment of a woman’s life when their menstrual cycle stops as their ovaries cease its reproductive function. It refers to all the stages and the changes they have experienced just before and after their period ends.

This phase usually occurs between the ages of 45 to 55, but, some may even experience the symptoms as early as 41. A woman’s menopausal age is greatly influenced by genetics. Thus, it can be predicted by examining the age when your mother, aunts, and grandmother had their menopause. However, other elements can cause it to come earlier, such as inherited issues or genetic mutations.

Menopause means that a woman’s period has entirely stopped for at least 12 months. On average, the complete process takes seven years and might even be longer for some. Natural menopause can be described in three stages:

1. Perimenopause or the transition stage when the ovaries gradually produce less estrogen and stop releasing eggs. This phase starts typically when the woman is in her 40s, but may also begin in the 30s. Women still have their menstrual periods, can get pregnant, but may also feel some symptoms.

2. Menopause is the phase when the menstruation of a woman stops. The ovaries no longer release any eggs and estrogen is no longer produced.

3. Postmenopause refers to the stage after going through menopause. For most women, the symptoms lessen, but some continue to experience the symptoms. Women at this stage should be mindful of their health as low levels of estrogen has a significant impact on overall health.

The Effect of Menopause

As mentioned earlier, menopause causes the ovaries to stop producing estrogen. As a result, the following can occur to a woman’s body.

These signs are commonly used as an indication that menopause is imminent. Hormonal fluctuations cause ovulation to be less frequent, which also affects the mood due to the shift of hormone levels. Changes in mood during menopause can also be caused by factors such as poor health, depression, and stress.

When the body is no longer in a reproductive state, natural lubrication is no longer produced by the body. The lack of estrogen can cause vaginal tissues to become thinner and drier, resulting in vaginal dryness. This can then cause itchiness and irritation in the intimate area.

Vaginal moisturizers and gels are recommended to relieve the discomfort of vaginal dryness. Rejuvenate by Rejucream Daily Vulva Moisturizer uses naturally derived ingredients to nourish, soften, rejuvenate & protect the vulva. It can also be used to soothe and comfort any irritation and itching caused by shaving and waxing.

The lack of libido can occur during menopause because of the drop in estrogen level paired with vaginal dryness. Sex may also be painful for some due to the lack of lubrication in the intimate area. Although over the counter lubricants can help or better consult with your doctor to up your sex drive.

Also called bladder leakage, the drop in estrogen levels causes this symptom. Women in menopause tend to urinate often or experience a leak when laughing, sneezing, or working out.

The most recognized symptom that a woman is beginning menopause is hot flashes. This is signified by a sudden feeling of warmth, like having a fever which can last from seconds to a few minutes. It is often accompanied by blushing and perspiration.

There is still no proven cause of this symptom but is often described to be related to changes in circulation. It can also be called night sweats when it occurs during sleep.

A woman’s body tends to reserve more energy during menopause resulting in difficulty in burning calories and fat, especially around the midline. The low levels of estrogen may also increase the risk of heart attack and stroke. Menopause can likewise cause bones to lose density leading to increased chances of bone fractures and in developing osteoporosis.

It is also wise to consult with an OBGYN and health experts when symptoms become troublesome as they can assist with therapies and medication. Remember that every woman goes through menopause differently; it is best to listen to your body and seek help when needed.