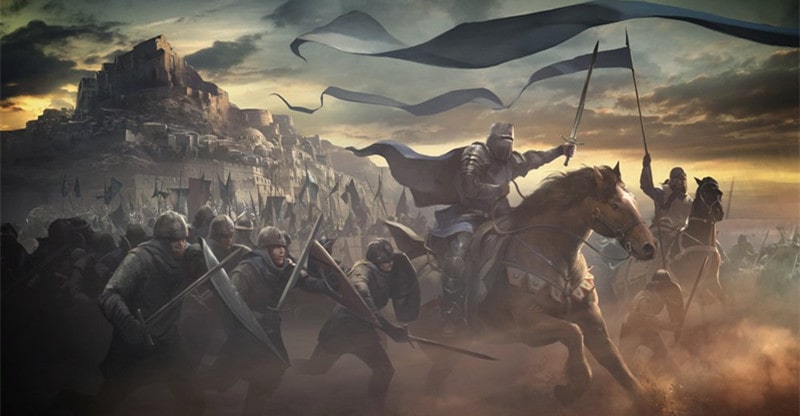 When I first heard the term spiritual warfare, it felt completely contradictory to me. Those two words simply did not belong together in my mind. However, something kept me thinking about the phrase for a long time. Once I delved into spiritual warfare quotes, the whole concept began to make perfect sense.

Thinking of the world as a battlefield between good and evil is not a new idea. But, understanding that the actual battle takes place in our souls was a revelation. What struck me the most was the realization that it was ongoing and constant.

One does not have to be a religious person to grasp this notion. We all strive for the same thing, whatever we choose to call it. I compiled a list of my favorite spiritual warfare quotes to suggest one of the paths to conquering our inner darkness.

#2. “Believers saw it as a holy battle, a spiritual warfare at its height. Believers saw themselves in a spiritual war with demons and did not see flesh and blood. When being persecuted they had pity and love for the persecutors.” ― Greg Gordon, The Following of Christ

#3. “The nature of the enemy’s warfare in your life is to cause you to become discouraged and to cast away your confidence. Not that you would necessarily discard your salvation, but you could give up your hope of God’s deliverance. The enemy wants to numb you into a coping kind of Christianity that has given up hope of seeing God’s resurrection power.” ― Bob Sorge, Glory: When Heaven Invades Earth

Spiritual Warfare Quotes to Help You Understand Your Weaknesses

#4. “Temptation is not his (Satan’s) strongest weapon. Despair is.” ― Dennis Garvin, Case Files of an Angel

#5. “One of the enemy’s sneaky attacks against the joy of our salvation is to put us in the spiral of self-condemnation.” ― Linda Evans Shepherd, Winning Your Daily Spiritual Battles

#6. “Over the years, I have come to realize that the greatest trap in our life is not success, popularity, or power, but self-rejection. Success, popularity, and power can indeed present a great temptation, but their seductive quality often comes from the way they are part of the much larger temptation to self-rejection. When we have come to believe in the voices that call us worthless and unlovable, then success, popularity, and power are easily perceived as attractive solutions. The real trap, however, is self-rejection. As soon as someone accuses me or criticizes me, as soon as I am rejected, left alone, or abandoned, I find myself thinking, “Well, that proves once again that I am a nobody.” … [My dark side says,] I am no good… I deserve to be pushed aside, forgotten, rejected, and abandoned. Self-rejection is the greatest enemy of the spiritual life because it contradicts the sacred voice that calls us the “Beloved.” Being the Beloved constitutes the core truth of our existence.” ― Henri J.M. Nouwen

#7. “Many Christians… find themselves defeated by the most psychological weapon that Satan uses against them. This weapon has the effectiveness of a deadly missile. Its name? Low self-esteem. Satan’s greatest psychological weapon is a gut level feeling of inferiority, inadequacy, and low self-worth This feeling shackles many Christians, in spite of wonderful spiritual experiences and knowledge of God’s Word. Although they understand their position as sons and daughters of God, they are tied up in knots, bound by a terrible feeling inferiority, and chained to a deep sense of worthlessness.” ― David Seamands, Healing For Damaged Emotions

Spiritual Warfare Quotes to Teach You to Accept Your Strength

#8. “Take God at His Word – because winning the battle doesn’t require physical brawn, but spiritual brains!” ― Pedro Okoro, Crushing the Devil: Your Guide to Spiritual Warfare and Victory in Christ

#9. “Men may spurn our appeals, reject our message, oppose our arguments, despise our persons, but they are helpless against our prayers.” ― J. Sidlow Baxter

#10. “Whatever your station or position in life, there is always room for improvement, enhancement, and perfection. I say this with a great sense of humility. Regardless of what you are enjoying at the moment, the Lord says that he has something better for you! No matter what you have achieved, attained, or accomplished in this world, there are more challenges and blessings ahead. God says that you have stayed long enough on this mountain. It is time to press forward to take more territories and receive more trophies.” ― Pedro Okoro, Crushing the Devil: Your Guide to Spiritual Warfare and Victory in Christ

Spiritual Warfare Quotes to Show You How to Fight

#11. “The truth is that there is an enemy and he’s out to destroy us. And if he can’t destroy us because we’re eternally secure in the arms of God, then he will seek to debilitate us, rendering us useless for God’s kingdom work here on earth. This is a real battle, and it’s raging all around us even in this moment.” ― Asheritah Ciuciu, Full: Food, Jesus, and the Battle for Satisfaction

#12. “Spiritual warfare is very real. There is a furious, fierce, and ferocious battle raging in the realm of the spirit between the forces of God and the forces of evil. Warfare happens every day, all the time. Whether you believe it or not, you are in a battlefield. You are in warfare.” ― Pedro Okoro

We all carry the darkness in our hearts, but we don’t have to give in to it. What some of these great quotes teach us is that life is a battle. But not the one we fight with arms. Our greatest weapons are our souls that long for love.

I tend to read these spiritual warfare quotes like universal truths that transcend conventional doctrines of Christianity or any other organized creed. After all, there are many ways to be religious, but only one to be humane.