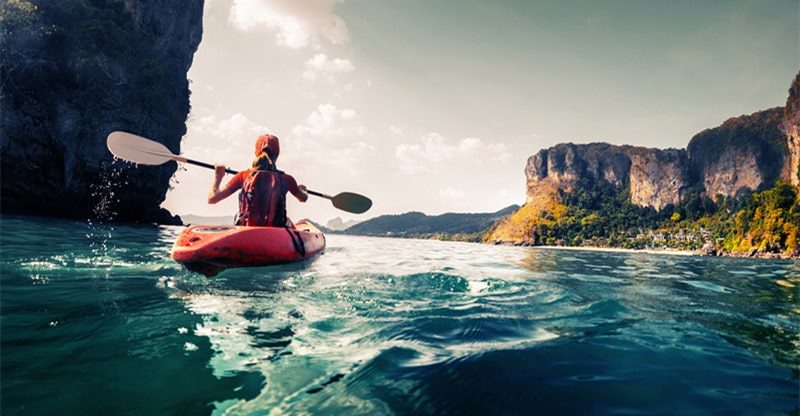 Itching for a rush of adrenaline but don’t know where to head? It is one thing to travel to watch a sporting event and entirely another to go to some of the world’s most exhilarating locations to experience nothing short of bonkers. If you are ready to feel your pulse racing and crave an outing that you will remember for a lifetime, look no further.

Here are some travel destinations that will blow your mind and might even keep you coming for more.

1. Queenstown, New Zealand – A bit of everything!

Google ‘adventure capital of the world’ and Queenstown in New Zealand will pop up as the first result. The resort town is much famed for its adventure activities that range from hang gliding and paragliding to scuba diving and kitesurfing. However, it offers much more – including traditional sports such as rugby, golf, cricket, and netball.

Bungee jumping and skydiving are perhaps the most famous adrenaline-pumping activities in town. It is known as the first place in the world to commercialize bungee jumping at the famous Kawarau Bridge. Water adventure sports such as kayaking, white water rafting, sledding, and surfing are also major highlights of the resort town that literally has it all. If you like boating, check takacatamericas.com for more information. Anyway, don’t forget your wetsuit!

Along with all the aforementioned things to do, Queenstown also offers a relaxing aura – delicious cuisines, remarkable lakeside promenades, and jaw-dropping mountainous scenery sum up the fantastic travel destination.

Kathmandu’s fantastic reputation as the gateway to the highest mountain peaks in the world cannot be overstated. Nepal’s capital is tucked in between the greatest mountain range in the world, the Himalayas. This makes it a wonderful destination for trekkers, adventurers, and mountaineers alike who throng in during the high season to experience one of nature’s unforgiving art – mountains, massive mountains.

While summiting Mt. Everest remains one of the greatest feats one can possibly achieve, there are hundreds of other activities to explore in the region, such as mesmerizing treks, short hikes, summit climbs, and even sky diving from above the most gigantic mountain range on earth. The Himalayas are a jewel and it is certainly a destination to not be missed on anyone’s bucket list.

An activity that dwarfs some of the most thrilling adventures out there, volcano boarding is a real thing just outside the town of Leon in Nicaragua. It is the adrenaline rush one experiences when surfing down the face of a volcano – the active Cerro Negro, Central America’s youngest volcano.

The sport was pioneered by an Australian traveller a few years ago and has picked up pace among the larger community. Lava has been spewed no less than 20 times since the volcano first started forming in the late 19th century, but that has not deterred adrenaline junkies from making it a playground.

One needs to hike up the volcano crater, jump in a heat-resistant suit, grab a board and zoom down at speeds of up to 80-90km/h. Unlike sand surfing or snowboarding, jagged volcanic rocks do not make for a very pleasant experience, but that is exactly what adventure sports are all about.

The home of the ancient Maya people, Yucatan is a biodiversity-rich region with thick jungles, tropical rainforests, and mysterious cenotes (natural sinkholes or underground caves filled with fresh water). These cenotes attract huge numbers of adventure enthusiasts who wish to explore the glassy emerald Caribbean waters of the Yucatan through cave diving.

Diving in these limestone caves filled with clean rivers below is a must-do activity when in the region. Yucatan is one of the world’s best cave-diving destinations open all year round due to the temperature being regulated regularly by the presence of limestone, so there is no bad time to visit.

Many of these cenotes are located in remote parts of the jungle, which makes getting to them an adventure on its own. You can also swim alongside whale and bull sharks at Isla Holbox, snorkel alongside sea turtles at Akumal beach, or simply scuba dive at one of Mexico’s most reputed dive sites, Cozumel.

The most dangerous mountain hike in the world – no crampons, no icicles, no heavy gear, no equipment – just you, your nerves, and a 30cm wide wooden board alongside a 7,000 cliff drop. Located in the landlocked Shaanxi province, Huashan is one of five sacred mountains of China, known for its infamous cliffside plank paths.

The narrow wooden-bolted path has captured the attention of thousands of thrill-seekers from around the world who head here to challenge their nerves. It all begins by climbing a set of vertical steps from the bottom, before holding onto a loose chain to literally climb a rock face.

However, with the best reserved for the last, the walk on the suspended planks is not for the faint-hearted but the views are jaw-dropping, to say the least.

The destinations mentioned above are a few of the extensive crop of adventure-friendly locations worldwide. These are off-road destinations unlike other recreational places such as Las Vegas or Macau, both of which are destinations to visit if one loves the adrenaline rush of gambling and betting and are shockingly good adventure spots as well at the same time.

Of course, if travel is not possible due to the current circumstances and online betting and gaming float your boat, online VIP casino sites that offer exclusive programs for players could be the way to go.

Players, whether old or new, can access a huge range of bonuses and rewards such as loyalty points, cashback, accumulator schemes, etc. among which, VIP programs stand out as the most rewarding. From faster pay-out times to having personal assistance and exclusive access, the perks are bountiful.

Air travel between nations has resumed in most parts even though it is highly restricted to certain schedules. It should not be a problem to book your flight, provided you meet the travel requirements for each of the respective countries – mainly with either an RT-PCR negative test or the proof of vaccination.

2021 is slowly opening up travel routes and there is no better time than this to explore places, especially when crowds encounter largely restricted movements. The pandemic may have given these destinations a breath of fresh air without thronging crowds, but due to their off-limits and high-adrenaline persona, they probably do not gather much travel attention anyway. Sometimes they do, by the adrenaline junkie in you.