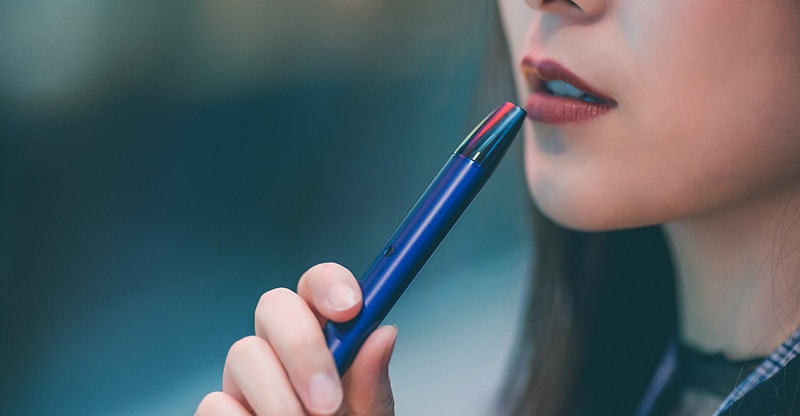 Electronic cigarettes have a short history. They were introduced in Europe in 2006 and made their way into the United States by 2007. Known as vaping, the activity rose in popularity quickly as a cleaner alternative to harmful cigarettes.

But are e-cigarettes really cleaner and safer than smoking regular cigarettes? It’s too soon to know the long term health effects from vaping, but there are many studies warning of the health implications, especially in the younger generations who have most embraced the trend. Here is more information on what we know so far about how vaping can affect a young adult’s health:

Vapers Have a Higher Risk of Interrupted Brain Development

Many members of Generation Z are under the incorrect impression that vaping is a natural alternative to smoking and the perfect solution to weaning off of cigarette smoking. But statistically, 90% of smokers continue to smoke cigarettes while vaping, making the situation worse.

There are no studies on how exactly, smoking or vaping affects a young person’s brain. But research shows that nicotine interferes with memory, learning, and brain development in the young animals tested. And vaping introduces a whole slew of chemicals to worry about.

Besides nicotine, vaping products include other harmful chemicals often found in paint solvents and antifreeze. The Surgeon General warns that younger generations are most at risk for the long term and long-lasting effects of vaping since the brain continues to grow and develop until the age of 25.

Young adults who expose their developing brains to the chemicals found in e-cigarettes harm the parts of the brain that control attention, impulse control, and learning.

Vaping May Lead to Clinical Depression

Studies also conclude that young adults who vape double their chances of suffering from clinical depression. Generation Z is especially affected. Researchers found that prolonged exposure to the nicotine found in e-cigarettes “disrupts the cerebral dopamine pathway, amplifies stress sensitivity, and distorts the coping mechanisms that buffer against depressive symptoms.”

The depression and vaping link was strongest in the most frequent vapers. The most effective way to manage depression in young adults who smoke e-cigarettes is to help them quit vaping altogether.

E-Cigarette Use Leads to Lung Disease and Death

The aerosol e-cigarettes output contains ultrafine particles that are absorbed deep into the lungs. An e-cigarette’s flavoring contains chemicals including diacetyl, which is known to cause lung disease. Other vaping-related harmful compounds found in the fine mist include nickel, lead, tin, and benzene, which is commonly found in car exhaust.

Vaping-related illnesses have recently skyrocketed in the U.S. Over 2,500 people were diagnosed with acute lung illness with 54 deaths. Health officials found that vitamin E acetate was the toxic culprit. Of 51 people tested, 48 carried vitamin E acetate in their lungs. What’s most alarming is that more than half of those hospitalized with severe lung damage are 24 and under.

Considering the number of harmful chemicals and metals contained in a cartridge, e-cigarettes should be treated as medical waste and disposed of accordingly. Incinerating vaping tools can be harmful to the environment by causing toxic chemicals to be released into the air from the burning process. Metals or chemicals could leech into the groundwater supply creating contamination.

The sweet flavoring found in vaping products contains cancer-causing chemicals. Besides the increased exposure to cancerous materials, vaping can create significant oral damage. The aerosol used in an e-cigarette consists of a substance similar to sugar, which can cause tooth enamel and surfaces to develop bacteria and reduce tooth enamel hardness, increasing the risk of cavities.

Smoking E-Cigarettes May Affect the Heart

E-cigarettes could also adversely affect the heart. Heart disease is generally seen in older individuals, but vaping accelerates heart disease in younger generations. The aerosols damage the circulatory system and the heart. The danger is even greater in vapers who also smoke traditional cigarettes.

The National Academy of Science’s study found “substantial to moderate evidence” that vaping increases heart rate and blood pressure, both of which could negatively affect heart health over time, especially if the user is a habitual vaper.

Is Vaping Safer Without Nicotine?

Nicotine-free vapes are available as a “healthier” alternative. Many vapers believe e-cigarettes are safer if they don’t contain nicotine. Although an e-cigarette containing no nicotine is safer than a regular cigarette, vaping is still dangerous.

As explained, the aerosol cartridge in the e-cigarette device contains extremely fine particles that are absorbed deep into the lungs and contain chemicals and heavy metals that are harmful to your health.

How Generation Z Can Quit Vaping

Quitting vaping can be as difficult as quitting smoking because of the nicotine. Nicotine is highly addictive. The drug boosts energy and mood, curbs hunger, improves concentration, and gives smokers or vapers a general sense of well-being.

Quitting leads to the opposite of the positive side effects. Nicotine withdrawals lead to an intense craving for the substance, confusion, anxiety, severe headaches, depression, and weight gain. Young adults who want to quit vaping should follow the same guidelines as they would to quit smoking. Some states may have programs and resources to help younger vapers and smokers quit.

Marketers target the younger generations who are more vulnerable to misleading advertising.

The World Health Organization (WHO) announced in 2008 that electronic cigarettes are not a legitimate smoking cessation aid and demanded that e-cigarette manufacturers and marketers immediately remove any wording suggesting that.

Electronic cigarette companies continue to market to Gen Z and younger by promoting the “natural aspects” of vaping as an alternative to cigarette use and the variety of flavors available. Almost 42% of teens answered that they vape because “it tastes good.” The federal government needs to ramp up its efforts to discourage vaping among young adults and regulate how vaping companies market their products.