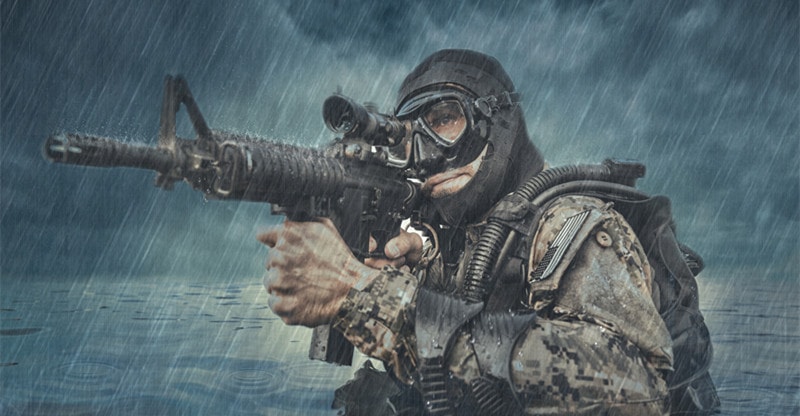 There comes a time in everyone’s life when we feel like there’s no way out and we have to give up. We feel like life has beaten us down and we can’t find the inspiration to get up and go on. In those moments of darkness, we need to look for a beacon of hope and perseverance.

And who better to turn to than the modern-day superheroes — Navy SEALS. Ever since the force was formed back in the 1960s, it has been a symbol of strength, hard work, and dedication. That is why we’ve created this list of 25 best navy seal quotes to help inspire and motivate you in your time of need.

#1. “There’s a storm inside of us, a burning river, a drive. You push yourself further than anyone could think possible. You are never out of the fight.” — Marcus Luttrell

#2. “I have to face the final battle by myself, maybe lonely, maybe desolate, maybe against formidable odds. But I was not giving up.” — Marcus Luttrell

#3. “I had made up my mind that I was not going to quit – no matter what. Hell week’s intense discomfort & exhaustion was something to be endured – minute by minute. We never knew what was coming next. The trick was to just get through whatever was happening.” — John Gulick

#4. “They could beat you, run you, make you endure untold cold and pain, and kill you. But they could never make you quit.” — Walter Diaczenko

#5. “I think hell week is a time when a guy develops an ”I will never give up” attitude. As you know, this mentality that is developed in training will stick with a Seal throughout his life.“ — Bill Bruhmuller

#6. “Make up your mind to do it. Proceed one step, one hour, one evolution at a time. Help your teammates whenever you can. Keep going.” — Denny Johnson

#9. “Put your mind in neutral and your ass in gear.” — John Parrish

#11. “Get comfortable being uncomfortable.” — Unknown

#13. “The only thing that got me through was my classmates. They were pulling me while I was pulling them. No one gets through training alone, no one!” — John Roat

#14. “As one of my more famous teammates is known to say, “Can’t Quit, Not Dead!” That is the kind of motivation you need to get through training!” — Roger Guerra

#15. “I think that’s one of the primary things that keep people going in tough times, or in combat; their friends and family depend on them. Training weeds out the self-serving, selfish individuals, and keeps the team players who we can count on to be there when we need each other.” — Daniel Olson

#16. “There comes a point in time somewhere in BUD/S where everyone has that moment when they say “I’ve had enough.” And that’s when you rely on your teammates to give you that extra push to get you over that moment.” — Ben Lichtenberg

#17. “Pain, lots of pain and teammates push each other as hard and far as it takes to make it. We did not think, we just did. When someone drops out on a boat team, the rest have to carry the extra weight.” — Larry Burchett

#18. “If you work together as a team and put out as hard as you can for a short period of time, you’ll get to rest while everyone else pays for not working so hard.” — Unknown

#19. “You don’t ever let quitting enter your mind as it is a sickness that will weaken you. Never quit, never consider it!” — Ron Seiple

#23. “No matter what, they can’t kill me, that’s against the rules. Others have run this same route and they lived. I will not quit! No matter what, you can’t make me ring that bell. If my classmates can do this, I can! Just finish this evolution, the next one is easier. Quit, how do you spell that? The reward for this is a weekend of sleep.” — Patrick Park

#25. “The more you sweat in training, the less you bleed in combat.” — Unknown

The one thing we should all take away from these Navy Seal quotes is that hard work pays off. As long as we persevere, keep pushing through, and get up every time we fall — we can expect great things in life.