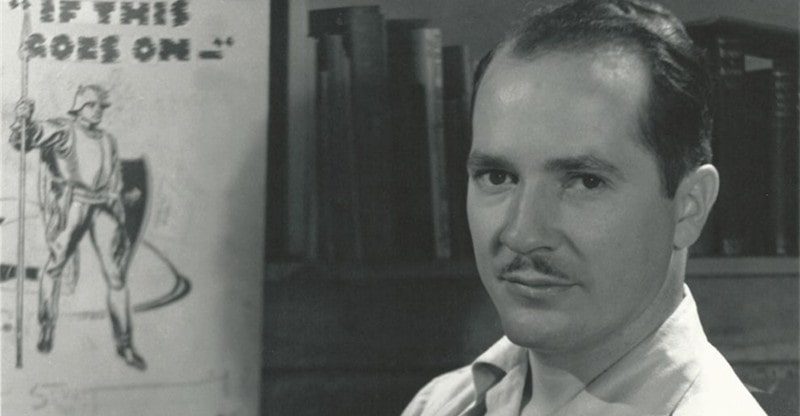 Commonly referred to as the “Dean of Science Fiction Writers”, Robert Heinlein was a famous American author, aeronautical engineer, and naval officer. Until his death in 1988, Heinlein had published many books, both fiction and non-fiction. He is remembered for his direct appreciation for competency and emphasis on the importance of critical thinking.

Some of his notable works include Stranger in a Strange Land, The Moon Is a Harsh Mistress, and Time Enough for Love. His carefully chosen words have been an inspiration to many people, encouraging them to have a mind of their own. Here are 28 Robert Heinlein quotes to inspire you to be free.

​28 Powerful Robert Heinlein Quotes That Inspire You to Be Free

​Robert Heinlein Quotes to Inspire You to Pursue Happiness

#1. “Happiness consists in getting enough sleep. Just that, nothing more.”

#2. “I’ve found out why people laugh. They laugh because it hurts so much… because it’s the only thing that’ll make it stop hurting.”

#3. “Cast me into a dungeon, burn me at the stake, crown me king of kings, I can ‘pursue happiness’ as long as my brain lives—but neither gods nor saints, wise men nor subtle drugs, can insure that I will catch it.”

#4. “First you must learn to control yourself. The rest follows. Blessed is he who knows himself and commands himself, for the world is his and love and happiness and peace walk with him wherever he goes.”

#5. “The supreme irony of life is that hardly anyone gets out of it alive.”

#6. “Never attempt to teach a pig to sing; it wastes your time and annoys the pig.”

#8. “Do not confuse ‘duty’ with what other people expect of you; they are utterly different. Duty is a debt you owe to yourself to fulfill obligations you have assumed voluntarily. Paying that debt can entail anything from years of patient work to instant willingness to die. Difficult it may be, but the reward is self-respect. But there is no reward at all for doing what other people expect of you, and to do so is not merely difficult, but impossible. It is easier to deal with a footpad than it is with the leech who wants ‘just a few minutes of your time, please—this won’t take long.’”

#9. “Time is your total capital, and the minutes of your life are painfully few. If you allow yourself to fall into the vice of agreeing to such requests, they quickly snowball to the point where these parasites will use up 100 percent of your time—and squawk for more! So learn to say No—and to be rude about it when necessary. Otherwise you will not have time to carry out your duty, or to do your own work, and certainly no time for love and happiness. The termites will nibble away your life and leave none of it for you.”

#11. “A prude is a person who thinks that his own rules of propriety are natural laws.”

#14. “A competent and self-confident person is incapable of jealousy in anything. Jealousy is invariably a symptom of neurotic insecurity.”

#15. “A society that gets rid of all its troublemakers goes downhill.”

#16. “Women and cats will do as they please, and men and dogs should relax and get used to the idea.”

#17. “One of the sanest, surest, and most generous joys of life comes from being happy over the good fortune of others.”

​Robert Heinlein Quotes to Motivate You to Free Up Your Mind

#18. “You can have peace. Or you can have freedom. Don’t ever count on having both at once.”

#19. “No amount of force can control a free man whose mind is free. No, not the rack nor the atomic bomb, not anything. You can’t conquer a free man; the most you can do is kill him.”

#20. “The universe never did make sense; I suspect it was built on government contract.”

#21. “No statement should be believed because it is made by an authority.”

#22. “Everything is theoretically impossible, until it is done.”

#23. “I am free, no matter what rules surround me. If I find them tolerable, I tolerate them; if I find them too obnoxious, I break them. I am free because I know that I alone am morally responsible for everything I do.”

​Robert Heinlein Quotes to Inspire You to Believe in Your Abilities

#24. “A human being should be able to change a diaper, plan an invasion, butcher a hog, conn a ship, design a building, write a sonnet, balance accounts, build a wall, set a bone, comfort the dying, take orders, give orders, cooperate, act alone, solve equations, analyze a new problem, pitch manure, program a computer, cook a tasty meal, fight efficiently, die gallantly. Specialization is for insects.”

#25. “Progress isn’t made by early risers. It’s made by lazy men trying to find easier ways to do something.”

#27. “Being a mother is an attitude, not a biological relation.”

Heinlein’s works probe a wide range of ideas about different topics including freedom, happiness, relationships, and life in general. Most of these ideas were considered radical and ahead of their time in terms of social criticism. But the wise and intelligent words found in his writings continue to inspire readers around the world.

In fact, several of his books have been adapted into films. Therefore, these Robert Heinlein quotes will revolutionize your mind and give you a brand new perspective on life, allowing you to think and act freely.