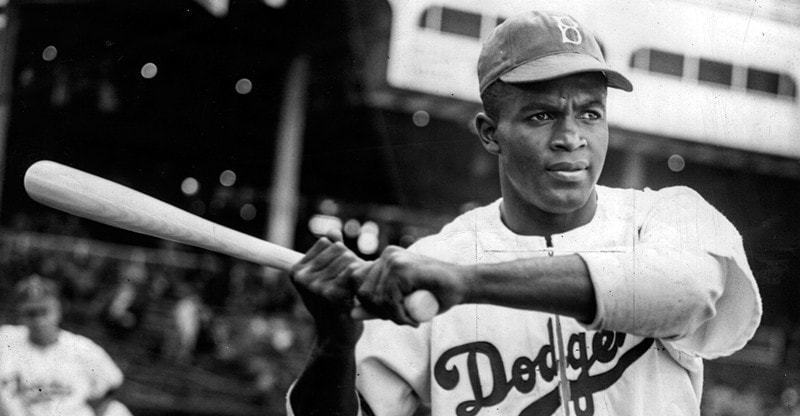 Jackie Robinson was born in Cairo, Georgia in 1919. He is known to be the first ever black athlete to play major league baseball in the 20th century. He set a league record for stealing home 19 times during his career, he is termed as one of the highest-paid athletes in Dodgers’ history.

Jackie settled with his wife Rachel and three children. The family faced racisms, death threats and insults but instead of getting affected, the couple braced through those insults, which lead them to become an advocate for Civil Rights Movement.

Let’s take a look back at his legacy and contribution by reliving some wonderful and inspiring quotes spoken by this award-winning baseball athlete, Jackie Robinson.

1. “It kills me to lose. If I’m a troublemaker, and I don’t think that my temper makes me one, then it’s because I can’t stand losing. That’s the way I am about winning, all I ever wanted to do was finish first.”

Life isn’t a race but the most important thing to remember is to keep on moving forward and strive harder to overcome any challenges life may throw at you.

2. “But as I write these words now I cannot stand and sing the National Anthem. I have learned that I remain a black in a white world.”

This is a memorable quote by Jackie which reflects the racism issues black people were facing during his time, and it sparked them to step up and fight for their rights, freedom, and equality on both white and black people in America.

Jackie hates to lose and that made him achieve different world records that contributed to his success.

4. “I’m not concerned with your liking or disliking me… all I ask is that you respect me as a human being.”

Jackie and his wife faced racism insults during his career, this reminds us that respect is the most genuine and important thing a human can give to other people.

Just like life, quitting is an act of weakness, know the fact that life isn’t a race, it may slow us down during our lowest point but remember to keep on moving forward, strive to win.

6. “Life is not a spectator sport. If you’re going to spend your whole life in the grandstand just watching what goes on, in my opinion, you’re wasting your life.”

Your life doesn’t revolve around other people’s life, you are the author of your own story, the only person who can turn each page is you.

7. “There’s not an American in this country free until every one of us is free.”

Racism is one of the problems that affected equality and human rights in America, Jackie and Rachel stood for equality.

8. “I guess you’d call me an independent since I’ve never identified myself with one party or another in politics. I always decide my vote by taking as careful a look as I can at the actual candidates and issues themselves, no matter what the party labels.”

Jackie also promotes to choose a responsible and respectable leader during the election with people’s own free-will.

9. “Are you looking for a Negro who won’t fight back?”

Racism oppresses its victims but also binds the oppressors, who sear their consciences with more and more lies until they become prisoners of those lies. They cannot face the truth of human equality because it reveals the horror of the injustices they commit.

10. “Negroes aren’t seeking anything which is not good for the nation as well as ourselves. In order for America to be 100 percent strong — economically, defensively and morally — we cannot afford the waste of having second- and third-class citizens.”

12. “The many of us who attain what we may and forget those who help us along the line we’ve got to remember that there are so many others to pull along the way. The farther they go, the further we all go.”

In life, we meet people that teach us different life lessons, some may cause us troubles but there are other people that will help us to achieve our dreams and guide us on our journey to success, do not forget them.

13. “The most luxurious possession, the richest treasure anybody has, is his personal dignity.”

Like Jackie said, dignity is the most important thing that every person should have. Knowing when to walk away is wisdom. Being able is courage. Walking away, with your head held high is dignity.

14. “At the beginning of the World Series of 1947, I experienced a completely new emotion when the National Anthem was played. This time, I thought, it is being played for me, as much as for anyone else.”

15. “How you played in yesterday’s game is all that counts.”

Learn to enjoy every minute of your life. Be happy now. Don’t wait for something outside of yourself to make you happy in the future. Think how really precious is the time you have to spend, whether it’s at work or with your family. Every minute should be enjoyed and savored.

16. “The right of every American to first-class citizenship is the most important issue of our time.”

Racism is still with us. But it is up to us to prepare our children for what they have to meet, and, hopefully, we shall overcome.

18. “I don’t think that I or any other Negro, as an American citizen, should have to ask for anything that is rightfully his. We are demanding that we just are given the things that are rightfully ours and that we’re not looking for anything else.”

Every human has four endowments – self-awareness, conscience, independent will and creative imagination. These give us the ultimate human freedom… the power to choose, to respond, to change.

22. “I do not believe that every person, in every walk of life, can succeed in spite of any handicap. That would be perfection. But I do believe that what I was able to attain came to be because we put behind us (no matter how slowly) the dogmas of the past: to discover the truth of today; and perhaps the greatness of tomorrow.”

24. “Relationships may change throughout the gift of time, memories stay the same forever in my mind.”

26. “Next time I go to a movie and see a picture of a little ordinary girl become a great star… I’ll believe it. And whenever I hear my wife read fairy tales to my little boy, I’ll listen. I know now that dreams do come true.”

The best way to make your dreams come true is to wake up.

29. “Baseball, like some other sports, poses as a sacred institution dedicated to the public good, but it is actually a big, selfish business with a ruthlessness that many big businesses would never think of displaying.”

31. “I had to fight hard against loneliness, abuse, and the knowledge that any mistakes I made would be magnified because I was the only black man out there… I never cared about acceptance as much as I cared about respect.”

Life is full of misery, loneliness, and suffering – and it’s all over much too soon.

Keep your dreams alive. Understand to achieve anything you need to have faith and belief in yourself, have vision, determination, and dedication and work hard. Remember all things are possible for those who believe.

33. “Pop flies, in a sense, are just a diversion for a second baseman. Grounders are his stock trade.”

34. “But if Mr. Rickey hadn’t signed me, I wouldn’t have played another year in the black league. It was too difficult. The travel was brutal. Financially, there was no reward. It took everything you make to live off.”

35. “I think it was one of the greatest times ever in the world to play baseball. Television was in its infancy. Breaking the color barrier.”

36. “We’re in a real crisis situation where many times people are being turned away at the door.”

We all learn lessons in life. Some stick, some don’t. I have always learned more from rejection and failure than from acceptance and success.

38. “Discover the truth of today, and perhaps find the greatness of tomorrow.”

A grateful heart is a beginning of greatness. It is an expression of humility. It is a foundation for the development of such virtues as prayer, faith, courage, contentment, happiness, love, and well-being.

39. “We have a social responsibility and we are held to a higher standard than other institutions.”

41. “A life is not important except in the impact it has on other lives.”

We all have points in our lives where two roads present themselves and we have to make a decision very fast. We don’t know how it will impact our lives, but it usually does. You have the opportunity to make a tremendous impact on the lives of the people with whom you work and live. Make the most of it.

• Jackie Robinson won the unified Rookie of the year award when he was 28 years old and also broke into the Major Leagues.
• Jackie first appeared in the major league baseball on US postage stamp in 1982.
• Major Leagues decided to choose Jackie’s number (42) to be the first one to retire for every team, 50 years after he became the first black guy to ever play.
• Jackie was named as most valuable player in 1949 by leading the National League for stealing bases and batting. Jackie also played for the Brooklyn Dodgers in one game and won the pennant.
• Mack, Jackie’s older brother won second place in the 100M race in Berlin 1963 Olympics.
• Jackie is not only known as a baseball player but also the first ever four-sport UCLA winner, playing the sports football, track, basketball and of course baseball.
• He scored twice in basketball during the Pacific Coast Conference.
• In 1940, he became a champion in NCAA with a record of 25 feet and 6.5 inches in broad jump.
• He also achieved the all-American status in football.
• Jackie Robinson was selected to throw out the first pitch at the 1972 World Series, the 25th anniversary of his breaking Major League Baseball’s color barrier, shortly before his death.

No matter what circumstances, obstacles, or challenges life may throw at us, he reminds us to keep on moving forward and fight for our rights. So, live your life with happiness and believe that your dreams can come true.