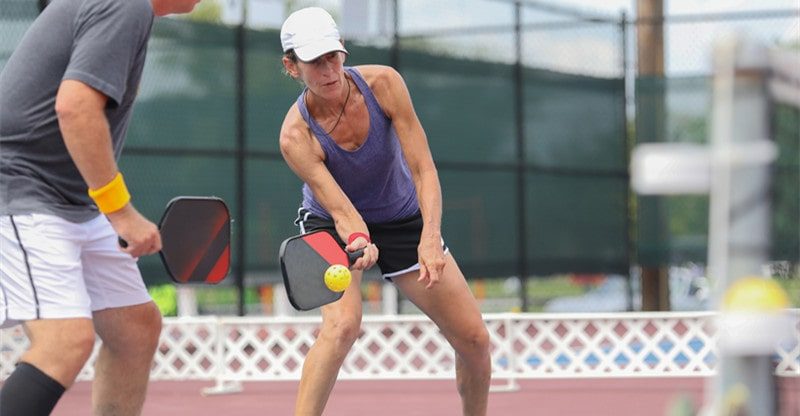 Despite its funny name, pickleball has been gaining in popularity since its inception in 1965. It is fun and addicting, no matter your skill level.

Pickleball was initially created in Washington by 2 fathers in order to entertain their children. It was an amalgamation of different games that they had on hand. The name itself comes from the pickle boat in rowing, not actual pickles.

A sign of its popularity is that in 2022 it was made the official state sport of Washington, and we expect to continue to grow around the world in the future.

It has been labeled one of the largest growing sports in the world. But what even is pickleball? In this article, we will lay out exactly what it is, and how it’s managed to gain such a large following.

As previously mentioned, pickleball was originally a combination of other sports equipment:

Pickleball is a relatively fast-paced game with you only needing to score 11 points to win. You are also able to play it as doubles or singles like tennis, so even if 2 of you have time you can still play a round.

While it is a simple game to understand, there are 7 rules of pickleball that are essential to know if you’re just beginning. Most of these rules are unique to pickleball. So even if you have previous experience in other racquet games, it’s still a good idea to familiarize yourself with them.

Factors Responsible For Its Rise In Popularity

Arguably, the main reason that pickleball has gained popularity is that it is easy to learn. This makes it accessible to all kinds of people, regardless of previous experience. If you want to get into racquet sports but don’t know where to start, then pickleball is the game for you.

Pickleball requires only a small upfront cost to play, the basic equipment needed being a ball, racket, and a net. In the nature of pickleball, you probably already own most of the equipment or have easy access to it.

Pickleball benefits from being able to be played both indoors and outdoors. It is common to find pickleball courts in community centers, public parks, and YMCAs across the United States. This has helped raise its popularity as it is readily available to a lot of people.

All Skill Levels Can Play

Despite being popular amongst senior citizens, pickleball was originally developed for children to play. This shows how diverse the player base for pickleball really is. It also highlights it as the perfect family sport to play.

Even professional tennis players partake in pickleball. This is because it is an easy and fun sport which is ideal for keeping up their skills between matches.

Pickleball is a great workout. Pickleball is less demanding physically than tennis, so it is better for those with lower stamina. It is said that an hour of pickleball can help to burn up to 350 calories.

As a low-impact sport, pickleball is also great for those with minor injuries.

Pickleball is also an incredibly social sport, this is because the courts are small enough to hold a conversation while you’re playing. Pickleball is a great way to make like-minded friends.

Due to the fact that pickleball is a combination of other sports, if you have practice in any other them then you will automatically have some experience with pickleball. While it is helpful, pickleball is easy enough to learn that you don’t need any previous knowledge.

Pickleball has been rapidly gaining in popularity all across the United States. From 2016 to 2019, it is believed that the number of active players in pickleball increased by 10%. It then increased by a further 21.3% in 2020.

So get out there and join in with the fun that the fastest-growing sport brings.